Hopefully you’ll have already read my previous post about using social media to reflect the increasingly vibrant nature of the Manx Gaelic language and cultural identity. Shortly after which, Facebook joined both Twitter and Instagram by adding support for hashtags too.

Whilst I’m sure the two aren’t related, this provides us with a further opportunity to aggregate #Manx #Gaelg content. Using hashtags in Facebook is as simple as tagging your friends in a post. Add the #hashtag and it becomes a clickable link. 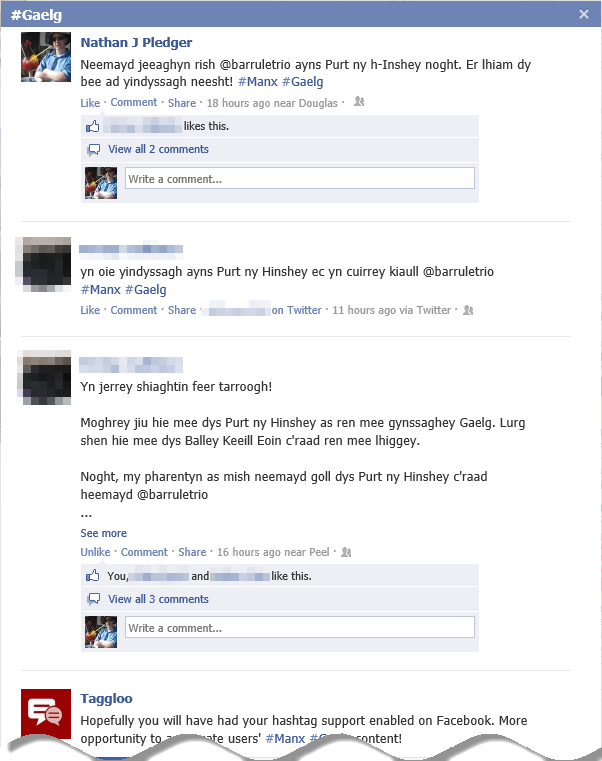 This is also good for those users who cross-post, particularly from Twitter. Some Twitter clients and services such as Selective Tweets pick up your post on Twitter and repeat it on Facebook. This is a great way to reach both social networks, and therefore the types of user who use either. I use it myself to reach “casual” followers on Twitter across the world and my Facebook friends and I receive engagement from both. Add the #Manx #Gaelg hashtag on your Twitter post and it is reflected on Facebook. Yindyssagh! 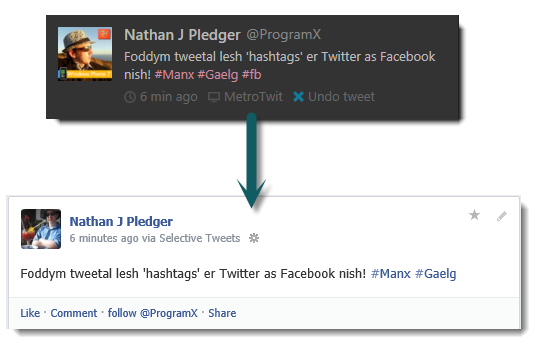 Where Twitter excels is in its broadcast quality, with very limited privacy. Facebook, despite their tendency to make a mess of privacy, has a much stronger model. Whilst this can significantly reduce the reach of your hashtags and therefore aggregation opportunities, it is still worthwhile to use hashtags on Facebook. Users who click a hashtag will see mutual friends also posting with the hashtag, contributing to the community feel. You might be surprised of your friends’ interest in the language!

I’m sure most people understand the basics of Facebook privacy, particularly posts. The small cog/people/world icon at the bottom right of your textbox when posting controls who can see the post. Typically, this will be set to “Friends” or “Public”. Whilst I would never suggest opening your default posting settings to “Public”, selecting “Public” when posting non-personal Manx Gaelic can increase the visibility of the language to other Facebook users.

The great thing about Twitter is that the service has largely been driven by its users. As users start to grasp the capabilities of the platform, they invent their own ways of interacting with people. Retweeting and hashtags were both very much community driven and it is exciting to see these features being adopted by other platforms such as Facebook.