If you haven’t arrived here from what brought me here, you might want to start there.

Without rehashing what came before, in leaving Windows Phone I find myself at odds with my ecosystem and being pulled back in to Google’s data black hole.

Don’t get me wrong, I love Windows and what it was/could have been. UWP and Windows 10 and x86 apps on ARM are exciting. I dislike Android and respect myself too much to buy in to Apple.

Call me old-school. But I can’t be alone. For a phone, I just want it to be fast, good looking, be easy to use (so a physical keyboard) and be reliable and secure. The industry is careering towards exactly the opposite. Apps suck battery power and require Octa-core performance, all phones I can see are just slabs, no phones (bar one) have a physical keyboard instead relying on increasingly “smart” (annoying) autocorrecting on-screen keyboards and the most secure platforms (Windows Mobile, BlackBerry) are essentially dead in the water. Even the respected brands for build quality and security, Nokia and BlackBerry, have failed and are now retooling as façade-brands whilst the same Far-Eastern-manufacturing-factory-drones as everyone is using are charged with trying to maintain the trust, build quality and heritage of former platforms – but cheaper, much cheaper.

The industry has failed me, producing nothing interesting, differentiating or exciting. It’s all just a bunch of black slabs differentiated only by the marketing wrapped around what is otherwise the same phone.

Except, maybe BlackBerry. BlackBerry have moved to Android (probably a smart move) and they’ve tried to transition the established trust they have developed in their brand (key of which is security) towards what is the most insecure platform available for mobile phones. They’ve sort of succeeded, too. Add on a physical keyboard and you get to the BlackBerry Priv. Alas, it looks like this was the first and last phone users could trust for build quality, as their production is now handled by the same Far-Eastern-manufacturing-factory-drone previously mentioned. But this isn’t a Priv review.

But, it’s a struggle.

I don’t know how you people manage on this platform.

Next job, trying to recreate my Microsoft ecosystem comfort zone, in someone else’s world …

Where am I? Read about how I got here.

Here I am in someone else’s platform. I need to migrate over to Android from Windows Mobile but retain the Microsoft ecosystem that has served me so well. Windows Central recently wrote their own piece on what is fast becoming a frequent task, but that was for switching to iPhone. This is my version, for Android.

Microsoft have been busy building for everyone else’s platform whilst their own platform burned. Often, these apps were even better than the Windows Mobile equivalent. Nice. Kick your users whilst they’re down.

There are a tonne of apps available for Microsoft users, and I’ve focused on Office 365 and some consumer apps:

I also included the MSN News apps, but quickly realised that without Live Tiles, I don’t have the same pull in to the app.

There’s actually an app “Microsoft Applications” which lists all Microsoft’s applications that can be installed. Well worth a look.

Reacquaint myself with Cortana

A feature I always used on my Lumias was Cortana. She was awesome. Excellent speech recognition, fast, clutter free and integrated in my ecosystem. Android has a Cortana app (one of my red lines) so I was hoping we could reacquaint with each other fairly fast.

Alas, she’s just not the same. She hasn’t got the same over-lock-screen access, she’s a little less available to my fingers and she doesn’t talk to me anymore. (I miss her “Wa-wa-waa”) 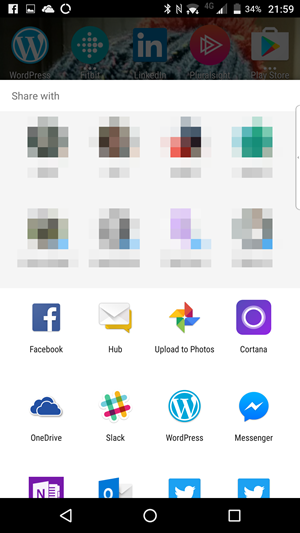 Sharing to other apps

Other than that, she’s been fine with everything I’ve thrown at her. She also notifies me on my Windows 10 desktop, as she used to with my Lumia 950 XL. I am counting on Cortana filling that gap between my phone and my ecosystem. She does still let me send text messages from my Windows 10 desktop, but the first message will likely fail because she needs permission.

How it’s working out …

There is another highly religious topic in tech other than “Are you PC or Mac?”. It’s “are you iPhone or Android?”. Did you notice anything wrong with that sentence? Given a market which comprises of 4 key smartphone operating systems, there is the distinct absence of both BlackBerry and Windows Phone 7. I am a big fan of Windows Phone 7 and I am always evangelising about it (after all, Microsoft are crap at telling us about their own products) but I do try to remain unbiased when people ask me which phone should they buy.

I can achieve this position by having them answer a few questions.

Do you have Apple devices in your house and/or are you a frequent iTunes user?

While a phone may be the best phone in the world, if it does not fit within your lifestyle/ecosystem, it is just a clever gadget without connectivity. If you have already invested in an Apple lifestyle, then the odds are iOS is best for you, so get an iPhone. You can use your iTunes, and the user interface will be pretty similar to what you’re used to. Coupled with the iPad, and you get yourself a really cohesive user experience.

Are you a tinkerer? Do you like to install apps, play with your phone for hours?

Android is an “open” source operating system. I’m saying “open” because I’m using the Google implementation found on mobile phones as the benchmark, here. And not all of it is open in the truest sense. If you like to play with your phone, hack it, configure it, tweak it, update it and hopefully avoid bricking it, then Android is a great choice. For most users, it’s simple enough to just work.

Do you have an XBox, with an XBox Live profile (Silver or Gold)? Do you want your phone to “just work”?

In this case Windows Phone 7 is a gem. It does not get in the way of what you need to do. It is not trying to be clever, it is trying to help you use your phone for what it is good for: making calls, texting and interacting on social networks. If you have an XBox, you can use your XBox profile on the phone and enhance your Gamerscore through XBox Live achievements. If you have Zune (that’s Microsoft’s poorly marketed iTunes competitor), you can listen to music on your phone, your XBox and your PC. It really does “just work”.

Are you interacting with your workplace/colleagues regularly?

BlackBerry may be on the wane, but it is undeniably a strong OS with regards enterprise integration. If you demand secure communications with your office, BlackBerry is a tough act to follow. However, whether the relevance of BlackBerry is on the decline as a result of the failure of the OS to keep up or changing user requirements is not clear. While BlackBerry is a strong contender, it isn’t necessarily a contender that will be around for long.

Under the covers, all these phones are the same. They are all running the ARM processor. They are all able to make calls, send messages, browse the web, etc. So it is not about “what phone is better”, it is “what phone best fits your lifestyle”. They all have application marketplaces, games, music players, etc. Some phones may do it better that others, but this is always relative to your own requirements.

For example. If you have iTunes at home, an Android is not going to play your iTunes.

If you have an XBox, an iPhone is not going to help you increase your Gamerscore

If you like to tinker, Windows Phone 7 is going to work against you.

On the other hand …

If you use Office a lot, maybe have a SharePoint of Office 365 scenario, Windows Phone 7 integrates seamlessly into this. All phones can read/write Office documents, but which one works naturally and fits best for you?

If you have high principles regarding software ownership, then Android is by far the winner. All phones have an established API and can be “hacked” to different levels, but how deep do you want to dig?

If you want to keep up with the Joneses, then an Apple a year will keep the stagnation away. There are a huge number of phones available and being made available month on month, year on year; but which one is the one to be seen with?

Hopefully this will help to separate vendor-religion, community politics and marketing sex from the mechanics of choosing a phone. It’s all about you and what works for you, as under the hood, they’re all the same.