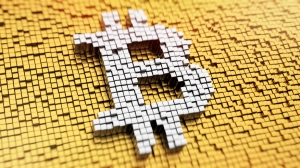 You’ll have heard of Bitcoin and the possibly cryptically named cryptocurrencies that are generating some interest in financial circles, well, everywhere but the big banks.

Bitcoin and similar schema represents an alternative to “fiat” currencies such as Pound Sterling, Euro, etc. You purchase Bitcoins on an exchange with either a web site or a smartphone, you find somewhere (or somebody) that accepts Bitcoin, they flash you wish a QR code and voila, you’ve debited enough cash to purchase a smoothie.

It sounds simple, but even as an IT professional, I have to admit to struggling to understand it and the paradigm. How can a so-called “virtual currency” be trusted? What about the end user, the consumer who wants to pay for their shopping? Flashing QR codes and requiring a smartphone is perhaps too much for some (including me).

To help convince me, I was treated to lunch at Java Lounge in Douglas, one of a growing number of cryptocurrency-accepting outlets on the island. My host asked to pay by Bitcoin and was given a receipt containing a QR code which was scanned by his iPhone-app and the amount of the bill debited from his “account”. Pretty slick.

Rewind a couple of days

Which is sweet, if you’re an iPhone or Android user. As a Windows Phone user, I’m left with an abortion of an app  which on first execution leaves the user with the screen:

What am I supposed to do with that? Swipe right and I get to “log in”: 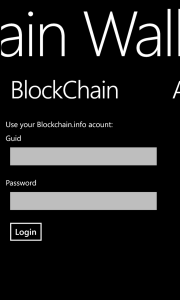 … with a GUID! Which I have to type on a smartphone keyboard!

Perhaps I should now mention that the Blockchain site I registered on briefly displayed a GUID which I struggled to later find to be able to enter in these fields. Which failed to log me in anyway.

Ok, maybe I was being dense.

As a test, I have a small amount in my “account”. Well, it’s not an account yet, it’s just a QR code. 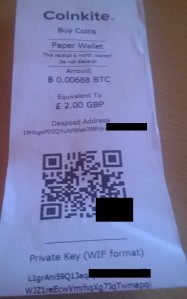 This was generated using the POS terminal, but is just as easily achieved using an “app”.

I now have to realise this as cash. So I go to the suggested website at Coinkite and “Sign up” to convert the voucher code on the receipt into currency in an account so I can spend it. Except, the web site “Sign up” form doesn’t work except if you use Chrome.

So far, we have a clunky replacement for a widely understood paradigm, complicated sequences of alphanumeric characters which form a check when transferring funds, a requirement to have an expensive smartphone for an optimal experience – as long as it isn’t Windows Phone and web sites which are poorly written and opinionated such that I can only use their preferred browser not my own.

All in all, a failure.

There is a distinct feeling of libertarianism around cryptocurrencies. As was explained to me, the blockchains are self-validating and carry greater strength than the bricks-and-mortar banks. We are going to be able to really stick it to the man, the man who has been bailed out yet continues to transgress in selling scams, rate fixing and the like. It’s certainly an honourable endeavour.

But I struggle to see how we can pitch this to the regular guy on the street. For me, QR codes, restrictions based on what smartphone you own, complexities of understanding the procedure (which QR code do I scan) and the trust people need that their money is safe creates barriers to entry. Acknowledging the evils of the banks and the iron-like grip companies like Visa have over our payment methods, it’s a well known paradigm that has lasted since the old mechanical clunk-clunk credit card “machines” that created an imprint of your card on some tracing paper. Since then we’ve had magnetic stripes, Chip and PIN, card security codes and now Near Field Communication payments – all using the same paradigm (now Apple are finally on board with this, cryptocurrencies might have an even bigger hill to climb). Hand over your card and swipe it, insert it or wave it wherever you see the “Visa” sign – which is, ahem, everywhere. Banks also have established account numbers, sort codes, IBANs, etc. I can remember these because they’re simple. 8 numeric digits is much easier than 34 mixed-case alpha-numeric characters representing my “address” (I understand one doesn’t “remember” this code, just like one doesn’t remember serial numbers on a bank note. My point is it’s displayed within apps therefore takes a slice of our attention).

Bitcoin et al. has many advantages. It is cheaper to use, it transfers the control of your money to you (or apparently, your smartphone) and it is “liberating”. But you can you really pay your mortgage using it? I look forward to seeing someone attempt to pay their mortgage (which is somewhat akin to risk) using a cryptocurrency at a bricks-and-mortar bank that it competes with. I can perhaps buy a smoothie, or a pint at some selected (though increasing) outlets. Maybe it could ultimately replace cash, considering people tend to carry small amounts of cryptocurrency around on their smartphone. Seems a similar approach to risk as carrying wads of cash. They just need to make the transaction simpler.

As I said today, we need to see the payment paradigm simplified. Requiring certain apps on certain smartphones and web sites on certain web browsers is not good enough. I was shown a debit-card style card that one can use much like a Chip-and-PIN card so the paradigm is getting closer – but I can’t use my Visa card in the Bitcoin terminal or vice-versa. Even American Express uses the same terminal as Visa!

In conclusion, I do like the idea – but it’s way too complicated.

One thought on “My Bitcoin experience”